Identity on the seashore

A long time ago, I had to study an essay called ‘Eupalinos ou l’architecte’ by Paul Valery. At the time, it made very little sense to an eighteen-year old from Bradford, but somehow part of it has stuck. There was in it, I think, quite a bit about the scope for creativity generated where sea meets shore, and unexpected things get thrown up completely at random. The idea that new ideas are most easily found in situations I now know to call ‘liminal’ seems to work quite well for all kinds of things and I can now link it with colour theory – green can be made to look very different if you put it against red or against yellow – as well as with literature and history.

I think now that there is a kind of seashore moment between history, particularly cultural history, and anthropology. Historians tend to think in terms of time and events, anthropologists in terms of geography and the everyday, so if you introduce an anthropological element to a historical situation, or vice versa you get to see a culture taken out of its historical or geographical context and that could spark something new. Naturally, there are risks. These are helpfully analysed by Conrad Leyser, who sees the greatest risk as being that of circular reasoning: anthropologists tend to see primitive societies through the prism of the history they learned at school, historians then recognise the picture drawn by anthropologists as relating to a historical period and round and round you go.[1] But it’s worth a shot.

In the short term, I’m wrestling with a modern article on identity in its anthropological sense, which seems to relate directly to us now. It is written by a Serb, Zagora Golubovic, and starts off with a survey of various academic studies of identity, looking particularly at the possibility of having more than one kind of identity.[2] Everyone starts off with a sense of belonging to a primary group, usually the family, which he calls a ‘personal identity’. Later, the individual acquires a ‘collective identity’: an individual retains her personal identity, but then adds a secondary socialization group – a school, factory etc. which brings with it the need to conform, to learn how to behave as a member of the group. For some individuals, at this point, ‘free determination’ becomes possible and an individual may separate from the group and see herself as unique. Golubovic believes that this third type of identity is only open to a few as it involves severing the ‘umbilical cord’ that connects to the group.

Golubovic moves quite swiftly to a modern example and looks back at the former Yugoslavia as an example of a state which, although it encompassed many different ethnic identities which were presumably related to the primary group and thus seen as ‘personal’, did, in his view, have a acquired ‘collective’ identity which was fostered by a proactive state. 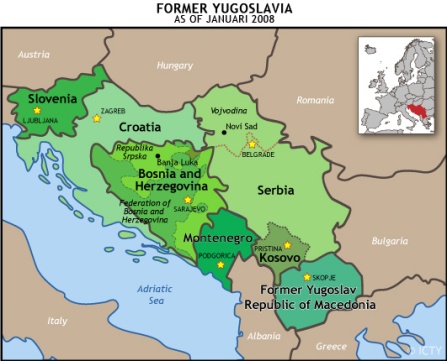 as broken up into several different states, based on ethnicity, and that collective identity has been lost. Gulabovic’s proposal is that the role of the EU should be to consciously establish a corporate identity, a cultural paradigm which might embrace the entire European community, particularly those areas that feel excluded from the current EU because of its overuse of English.

I hold no brief for defending this thesis. It is way outside my field and the article turned up in a Google search for anthropological discussions of identity and really drew my attention because of the current EU debate. But you could take this taxonomy and apply it to my dead monks.

So, in the medium term, I want to get my head round how this might apply to ninth century monks who probably never gave identity a thought. However, they did have a sense of belonging to something and a sense of mission. Collectively, they were tasked with ensuring the ‘correctness’ Charlemagne wanted to achieve in religious observance and it has been often argued that unity of religion was one of the ways through which Charlemagne sought to hold his large and disparate kingdom together.   Some individuals were tasked with elucidating the faith and dealing with heresy in its various forms. All this was part of creating, refining and enforcing a thread that gave a common identity to Charlemagne’s people. But they were also men of God, answering to a higher authority and tasked with holding even rulers to account. And they were sons of a monastery, responsible for teaching and learning and worshipping in a fixed place which had some sense of identity, often via foundation myths. So how should we analyse their identity?

I think this is worth pursuing. Watch this space. It may be a place where the sea meets the shore.

From time to time, it does you good to read something that is not medieval. For me, that always tends to be modern German history, mainly because some of it I have lived through and some of it I have heard from good and caring people from Germany and the UK who are sadly no longer with us. So I recently bought Thomas Harding’s book ‘The Lake House’ as ‘light reading’. The plan didn’t go all that well as I became ill shortly after buying it and for a while I thought I would never finish it. But now, several months on, I have.

And, as Quakers say, it speaks to my condition in this post Brexit vote and pre Trump presidency world. Briefly, Harding’s writing the story of a house near Berlin which his family owned in the early twentieth century. Because of its location – Gross Glienicke, which ended up in the GDR – the story of the house is a proxy for the story of Berlin, in much the same way as ‘The Hare with the Amber Eyes’ uses a set of Japanese netsuke to tell the history of a Jewish family from Vienna. At the beginning, a wealthy family chooses to build a holiday home in an idyllic lakeside setting; at the end, a descendant of that family rediscovers the house and negotiates the post war minefield of tracing the ownership of properties once owned by Jews well enough to gain local and national support to restore the house as a memorial to Jewish history.

But the real interest for me is not the building, but the way the dramatis personae cope with change. The inhabitants of the house in November 1989 had mixed feelings. Whilst feeling brave enough to bash a hole in their bit of the Berlin wall so as to show your son the lake beyond was fun, choosing to actually go and live on the other side of it was a different matter altogether. Whilst noticing that the border guards had gone was liberating, the fear that fact engendered as to what might replace them was real and palpable. The book’s earlier chapters form (one of the many) contemporary accounts of how the rise of the Nazis represented a very different kind of change – not one you could sit and watch on your television. Because of the time span of the book, and because of its geographical location you can almost turn it into a graph showing spikes of upheaval and periods of apparent calm.

And in the end, the ordinary people do much the same things in both. They adapt, they love, they disagree, they suffer personal losses, they enjoy personal triumphs. Disruption happens and the generations born in the West after 1950 will just have to get used to it.

Filed under Thinking about stuff

Why do borders matter so much?

At one level, I can see that good fences make good neighbours. It helps to know where you stand and sets limits around acceptable and unacceptable behaviour. But we can manage without fences. I live in a suburb with open lawns. Cats and toddlers run free but neighbours know exactly where to mow and where to stop. In my last house there was a right of way running under my kitchen window. No-one ever used it and I saw no reason to worry about it.

But beyond that, recent experience has shown that a lot of borders do no really matter.

Consider this part of the world:

We recently travelled from Athens to Venice by ship, calling in at places in the Balkans where in recent times new countries have formed and new borders have been drawn up. Travelling by sea is an ancient way of travel – you can’t draw a line in the sea and as a passenger you are unencumbered by port protocol and are free to perceive an almost seamless transition from one landscape to another until eventually the mountains and rocky outcrops of Athens have been completely replaced by the flat landscape of Venice. Athens, Venice, two very different cities. Different landscape, different alphabet, different language. But where exactly is the border between the two?

Well somewhere in what was once Yugoslavia I suppose. But the first border, after we left Corfu, now Greek, and before we docked at Sarande in Albania, passed without our noticing it. The excursion in Albania was to the archaeological site at Butrint, remarkable for its many layers of finds which reflect the history of the settlement as Greek colony became Roman pagan city became Roman Christian town became Byzantine, until finally the Ottomans presided over its gradual demise and the marshlands took over. Can such a monument belong to one country? Its borders are historical not geopolitical. Overnight we must have passed from Albania to Montenegro, for next day we cruised Kotor Bay, but again, what border? What difference? The landscape was rocky and mountainous but little settlements had developed at the edge of the sea, just as they have in the Austrian and Swiss Alps, or alongside the big rivers of Europe. At first, it looked like Switzerland with sea or a Rhineland vista without the Rhine. Three stops in Croatia – Dubrovnik, Split and Zadar – were the highlight of the tour but with a lingua franca of English, we had no way of telling whether we had crossed a national border or simply moved on within the same country. Ravenna, on the opposite shore of the Adriatic, should have felt different but when we went to see the Byzantine mosaics, there was immediately a stronger link to the icons and mosaics we had seen in Athens and in Corfu than to Italy. All these places have more in common than that which divides them, as we now say proudly.

All these places are now learning to get along with each other, and for the benefit of tourists, probably, they now don’t put on display too many of the cracks, although you can visit the site in Dubrovnik from where the city was shelled not so long ago. But what is it that they have in common? They have conquerors in common, it is true. Between them they have been conquered by Romans, Byzantines, Venetians, Turks, Brits and probably a few others we’ve not heard about. The foreign armies and navies, even the British one, which marked its departure from Corfu by blowing up the ancient harbour defences so that no other power might have the use of them, are long since gone. What remains are the cultural transfers that those conquerors brought. Styles of art, foodstuffs and recipes, dance and music, mostly transferred by a kind of accident when a traveller from one city found he could make a fortune by selling something which was totally new in another. It all crossed borders.

Remarkably, in our time, these porous borders which allow shared culture, shared life, the whole fertile mix of liminality, have been multiplying. Remarkably, a new one was set up today.

Filed under Thinking about stuff